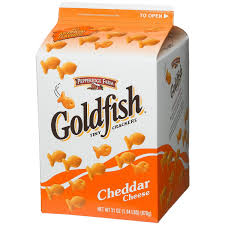 If you’ve bought Cheddar Goldfish snacks in the past four years, one fed-up Lake Worth mom wants to help you get your money back. And her multimillion-dollar effort has put South Florida on the forefront of a national debate over genetically modified foods. Disgusted by what her complaint calls false advertising, Palm Beach County elementary schoolteacher Lisa Leo has taken Pepperidge Farms to court, accusing the mammoth food manufacturer of mislabeling its popular fish-shaped crackers “natural” when she contends they contain genetically modified soybeans.

“Consumers have a right to know what they’re putting in their bodies,” said Joshua Eggnatz, Leo’s Weston-based attorney. “You may not think GMOs are bad for you, but others may, and the consumer has a right to know and to choose.”

Genetically modified organisms, or GMOs, are plant or animal products that have been re-engineered in a lab with the DNA of bacteria, viruses or other plants and animals to increase crop yield or make them heartier, more tolerant of herbicides, and resistant to insects, drought and other environmental factors. General estimates are that about 90 percent of the corn, cotton, soybeans and sugar beets grown in the United States are genetically altered, and they are most often used in highly processed foods like crackers and cereals.

The FDA has not officially defined what “natural” means in terms of food labels, but its website says the agency “has not objected to the use of the term if the food does not contain added color, artificial flavors, or synthetic substances.”

Eggnatz said Leo did not want to comment for this story, and he offered few details about why she filed the action.

But according to the complaint, Leo purchased the snacks monthly from three stores in the suburban Boynton Beach area and “paid a premium” for them, believing that the “natural” label meant they contained no GMO ingredients.

Leo, whom Eggnatz described as a middle-aged mother of two and grandmother of one, would have gone with cheaper, non-GMO options for her family’s snacks had she known about the Goldfish’s modified soybeans, according to the complaint, which does not allege that anyone in Leo’s family was sickened by the product.

Pepperidge Farms officials did not return calls for comment.

Though the complaint targets one product, it speaks to a growing concern over the long-term health consequences of America’s ever-evolving food supply.

Recent studies have suggested that re-engineered foods can create new unintended toxins and increase the risk of allergies. But the body of evidence is limited and not considered definitive.

Still, more than 60 countries around the world — including Japan, Australia and the European Union — ban or significantly restrict the sale and production of the lab-concocted ingredients, and the companies that make them have felt a stinging backlash in recent years.

One of the most visible protests erupted in May, when more than 2 million people around the globe rallied in coordinated demonstrations against St. Louis-based Monsanto, the world’s largest manufacturer of genetically modified seeds.

Amid the uproar is a national outcry for mandatory food labels in the United States. Congress is considering a bill that would direct the Food and Drug Administration to “clearly label” genetically modified foods. Florida and 14 other states are seeking to require the labels at the state level.

“I grew up at a time when a tomato was a tomato, and a piece of corn was a piece of corn,” said Florida Rep. Mark Pafford, D-West Palm Beach. “Science, or technology, has changed that, and there’s been a huge shift in our knowledge of what we’re ingesting.”

Pafford co-sponsored the bill considered during the 2013 Florida legislative session, but it died in committee. He and other co-sponsors plan to try again.

The food manufacturing lobby has so far been successful in beating back labeling mandates, arguing that consumers will assume that just because a product contains GMOs, it is somehow inferior or not as safe.

“It’s a hugely controversial topic, and when you look at both sides, they seem to make a lot of sense,” said Lillian Craggs-Dino, a registered dietitian with the Cleveland Clinic in Weston. “There are no easy answers in this one.”

Part of the concern over GMOs, Craggs-Dino said, is that many are modified with DNA from other species. Genes from an animal or shellfish, for example, can be added to a seed — a problematic scenario not just for allergy sufferers but for those following a vegan or Kosher diet

What is a GMO: A genetically modified organism is a product that has been changed in a lab to add DNA of bacteria, viruses or other plants and animals. The process involved crossbreeding of organisms that would not naturally occur in the environment. The modifications are intended to increase crop yield and make products more tolerant of herbicide and more resistant to pests, drought and other factors.

Detox from GMO’s: How to Detox GMO’s menawa.wordpress.com

Is Yoga for Christians? Yoga in Church

Cern : The New Tower of Babel, what you need to know

ABC Family Channel “The Fosters” -back in your face Disney and ABC, America doesn’t want your filth!