I’m in the Appalachian mountains vacationing, my internet isn’t working well and my word stopped working on me!   I’ve spent much time studying scripture in the last few days and have had many new revelations. I have lots to share, but I’m limited here. In the meantime, I wanted to show you something the Lord revealed to me…. so I’m going old school here- and I’m posting with crayons and markers- see below.  I just can’t keep this contained until I’m back to normal life- off the  snowy mountains….and as some of you may know, I’m not the artist, but I hope the message is clear.

I’ve been studying the woman in the ephah in Zechariah 5 (after a scary dream about it- I’ll write in another post-sccccaaaary!). I’ve put a lot of study into that which ties into other studies I am doing in Revelation 19-when the Lord comes back with His army and Matthew 24:12- increase of wickedness and 2 Thessalonians.  I have asked the Lord many questions, maybe too many.  One thing I’ve been really concerned about is the increased wickedness that is spreading. The government statistics will show another story,  but the Lord has shown me how wickedness has filtered into everything- our homes, our music, our children, our schools-spreading like wildfire- like a weed over all the earth. We have made excuses for every sin and don’t even realize it. Even things I thought were innocent…  I was playing the wii dance 3 and 4 with my girls and I knew I had to turn it off and return it. It was so dark and the words were demonic, depressing. The words they were chanting to the dance were ungodly! satanic! and promiscuous! Is it so difficult to make a clean game or movie today?  My Cd player in my car broke so we had to resort to some weird back country music as we drove her.   I heard a song with a great beat “She makes me suicidal, suicidal” it’s so catchy,  pretty soon everyone is singing it, the next song was “hope to die, stick a needle in my eye”- I was fighting with my husband to turn it off,  then I turn around to see what my child is doing on her new ipod (another thing I don’t agree with- take a good look at it’s symbol) and she is playing a game with a bunch of demons chasing her as she runs to an idol! agh!  I deleted it and prayed

“Dear Lord, please have my children despise the time on their ipods and anything else that takes them away from you, fill their heart with a desire for you” -He answered my prayer! No one has been on their ipods except to take a few pictures- hallelujah!!!

So last night I was talking to the Lord about all the verses in my head, asking him about things Daniel and John were not allowed to write down, about the wickedness going to Shinar by those two stork winged women (ew! they sound like fairies), the increased wickedness,the wheat, tares, and how the Lord will return as described in Revelation 19. As I was talking and asking…. I saw this…… 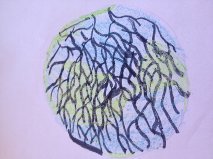 I know…… what is it? Okay this is what I saw:   I saw the earth and over it was growing this dark, thick, strong, choking black weed or root. I was beginning to cover the whole earth. I could see it had something to do with powers in the sky/ air- as if through tv, internet and those type of things… this wicked root was growing at a rapid speed.  Suddenly, my thoughts were full of verses helping me to understand how this ties into the wheat tares when the command for the great sickle is called upon.(actually my pic came out sideways because I saw the weed spreading from the east to west…see the picture I have below.)

Joel 3:13  Put ye in the sickle, for the harvest is ripe: come, get you down; for the press is full, the fats overflow; for their wickedness is great. Multitudes, multitudes in the valley of decision; for the day of the Lord is near in the valley of decision.
Rev 14:14-20 And upon the cloud one sat like unto the Son of man, having  on his head a golden crown, and in his hand a sharp sickle. And he that sat on the cloud thrust in his sickle on the earth; and the earth was reaped. And another angel came out of the temple which is in heaven, he also having a sharp sickle. And another angel came out from the altar, which had the power over fire, and cried with a loud cry to him that had the sharp sickle, saying, Thrust the in thy sharp sickle, and gather the clusters of the vine of the earth; for her grapes are fully ripe. And the angel thrust in his sickle into the earth, and cast it INTO THE GREAT WINEPRESS OF THE WRATH OF GOD. And the winepress was trodden without the city, and the blood came out of the winepress, even unto the horse and bridles, by the space of a thousand and six hundred furlongs.
Revelation 19:13-  And He was clothed with a vesture dipped in blood, and HIs name is called the Word of God. And the armies which were in heaven followed Him upon white horses, clothed in fine linen, white and clean. And out of His mouth goeth a sharp sword, and that with it He should smite the nations, and He shall rule them with a rod of iron, and He TREADETH THE WINEPRESS OF THE FIERCENESS AND WRATH OF ALMIGHTY GOD.
Matthew 13:7-  And some fell among thorns, and the thorns sprung up and choked them(see also Matthew 12-13)

(How did I see this? This wasn’t a dream or a place I was taken to- as in the past…it was different from my vision of the heart and the cross where I could see it like a movie screen before my eyes. This was, how can I explain it? In my mind’s eye as I prayed. I could see it as I was awake and praying. It’s understanding and scripture came into my mind as I looked on it and tried to understand what I was seeing.. This also happened to me with Revelation 19 two years ago- so I take the information the Lord gives me and back it up in scripture for understanding. I have a long way to go on understanding this, but I want to share the warning with you.)

Maybe I’ve said to much- so much to explain- but here is the message I think the Lord wants us to know- BEWARE AND BE READY. Beware of wickedness and evil that is rapidly spreading.  Stay in the Word of God night and day so you will know which way to go. Delight in His words and His ways and do not fall into the current of the World. Keep yourself ready at all times – to be pure, holy, and without blemish, waiting for His return. His Wrath is full and ready to be poured.  The sickle is ready to pull out this evil weed that has spread and we are told when this happens, the blood of many will be spilled- so much you can’t even imagine. Stay true and stay pure for the day of the Lord is closer than it was yesterday……………………………………..

Attn: Parents— watch what your children are doing, what they are watching, what games they are playing, what music YOU are allowing in their hearts. They are the easiest target for satan to go after, and he has unfortunately, done quite a job on our youth. Many times we don’t realize the wicked things we bring into our homes. This is something the Lord has shown me also- that even I have brought things into my home before my children that are wicked and evil and I didn’t even know it. Anything that takes away from God is unacceptable for children. I’m going to clean house, I hope you do to.

and remember:” In the world, ye shall have tribulation, but be of good cheer, I have overcome the world” John 16:33

6 thoughts on ““Put ye in the Sickle, for the harvest is ripe”.. tares, wheat ….and wickedness shall increase Revelaton 14, Joel 3.”